What Is Chronic Rhinitis?

Non-allergic rhinitis is considered chronic if it lasts four weeks or longer. It might seem a lot like hay fever, complete with cold-like symptoms that leave you feeling miserable and worn out. It’s not caused by an allergen, however, so your body doesn’t develop the telltale immune response. They feel so similar — and it can be so difficult to determine a cause — that it might take allergy testing to rule out hay fever. 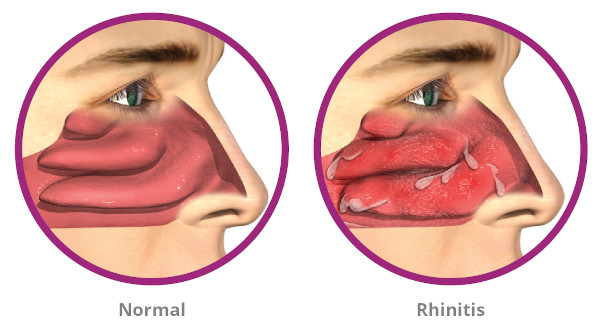 What Are the Symptoms of Non-Allergic Rhinitis?

Symptoms can be continual or come and go, and common ones include runny nose, nasal congestion, sneezing, and postnasal drip — but not itchy eyes, nose, or throat. These last three symptoms, if present, indicate you’re most likely experiencing hay fever. If your non-allergic rhinitis symptoms go untreated for too long, it can result in nasal polyps, chronic sinusitis, and ear infections.

What Are Some Common Causes of Non-Allergic Rhinitis?

Though the exact mechanism leading to non-allergic rhinitis isn’t clear, there are many known triggers, including:

In some cases, the specific cause can’t be identified.

How Is Non-Allergic Rhinitis Diagnosed?

A diagnosis of non-allergic rhinitis is based on your symptoms and medical history. Your doctor will most likely want to rule out allergies by performing skin and blood tests, and a nasal endoscopy or CT scan might be used to check for structural issues such as nasal polyps or a deviated septum.

How Is Chronic Rhinitis Treated?

Chronic non-allergic rhinitis treatment is based on how severe your symptoms are. Mild cases might respond to simple home remedies, such as nasal irrigation with a Neti pot or bulb syringe, use of a humidifier, or drinking lots of liquids. If you know specifically what’s causing your symptoms, avoid it if possible. Your doctor might recommend over-the-counter or prescription medication, such as antihistamines, decongestants, or nasal sprays.

Surgery is probably going to be required for structural problems such as nasal polyps, a deviated septum, or enlarged adenoids, but it’s usually reserved as a last resort.

Lasting relief is possible
If  any or all of the symptoms listed above sound familiar, you may be one of the millions of people living with chronic rhinitis. Until now, treatment often meant managing symptoms with medications and sprays. For many patients, these symptoms may be caused by abnormal signals in the nose. Now, your physician can offer you RhinAer to disrupt these signals and provide lasting relief. In a clinical study, patients treated with RhinAer experienced significant relief from chronic rhinitis symptoms.1 Patients typically return to normal activity on the same day.*

Non-invasive solution: Minimal discomfort, no incisions, and can be performed in our office.

Live better: In a clinical study, patients reported significant improvements in their symptoms and quality of life.1