What Is a Nasal Obstruction?

A nasal obstruction is anytime air flow in the nose is impeded because of a blockage of the nasal cavity. It’s also known as a nasal blockage. It can affect one or both nostrils. Many are caused by colds, allergies, sinus infections, or medications and are, therefore, temporary. Others require medical intervention. 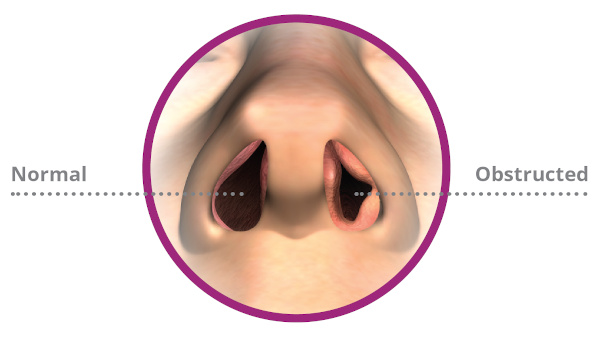 There are several different types of nasal cavity blockage. In addition to foreign objects in the nose, possibilities include:

The nasal septum divides the left and right nostrils. A deviated septum is simply one that’s crooked, and it’s very common. It’s estimated that the nasal septum of 80 percent of people is crooked to some degree — the question is whether it’s the cause of nose blockage. Symptoms include breathing difficulties in one nostril and a chronic runny nose.

The turbinates are bony structures in your nasal cavity. When irritated by allergies and dust, they swell and can cause breathing difficulties.

Another cause of nose blockage, this congenital defect leads to excess tissue in the nasal airway, which results in breathing difficulties.

Soft, noncancerous growths on the lining of your sinuses or nasal passages that are usually painless but can lead to nasal airway obstruction.

Adenoids are small patches of tissue that keep foreign particles from entering your body via your nasal cavity. They’re right above your tonsils and, when enlarged, can cause nasal passage blockage and breathing difficulties.

Often, a diagnosis confirming a nose obstruction is as simple as using a lighted scope, but some types of nasal obstruction might require use of a CT scan or MRI for correct identification.

The first step in nasal obstruction treatment is getting the symptoms under control by reducing inflammation. Medications or nasal steroid sprays are often helpful in this regard and provide immediate, short-term relief.

Some issues require surgery, particularly if it involves a deviated septum, turbinates, or nasal polyps. Nose blockage surgery has become quite advanced and less invasive. Newer techniques include using radiofrequency energy to shrink tissues or a small tissue-shaving device.

Lasting relief is possible.
If you regularly experience difficulty breathing through your nose and nothing seems to help, you may have nasal obstruction. Until now, finding a long-term solution often meant surgery. Now, your physician may be able to offer you lasting relief by performing a non-invasive VivAer treatment to open your nasal airway.

Non-invasive solution. Minimal discomfort, no incisions, and can be performed in our office.